This weekend hike was with a group of friends that I know from the vaulting club.
We started on a late Friday evening. We arrived in the dark, and missed an exit, and when we found out about it, we decided to take a short cut, by going straight up the hill to the castle ruin where we planned to stay overnight. Once we arrived, we made a fire and started preparing our food.
From left to right: Daniel, Kaja, Bara and Klara. And on the other side of the fire from left to right: Ondrej, me and Tomas. Dinner was delicious and wel deserved after a hard climb straight up the hill. Next morning we could see the surroundings much better. under the tarps where sleeping Ondrej, Klara and me, all others in the tent. A great view from the ruins over the valley with the river Berounka. Parts of the ruin. Before we left the ruin, we had to make a ‘gruppen foto’ as we call it. A few more will follow. From the ruins we went down again, and bushwack for a few km’s next to a river. After a few km’s we crossed the path that we should continue to follow from now on.
Again a ‘gruppen foto’ 🙂 After a short walk from the bridge we found this little lizard the crossing the path. Another great view during the walk. At a small lake we stopped for lunch. Mine consisted of salami, cheese and bread.

Continuing on our walk we came across several nice sightings, like this small forest of spiderwebs for example. Time for another ‘gruppen foto’. After several km’s, we made another short cut crossing from the high grounds down to the river.
While we went down on this steep hill covered by small and big rocks, we also encountered 3 wild boars, who ran away as soon as  they noticed us. No picture sadly enough. Some nice views along the river. We setup camp on top of a small hill, where plenty firewood was laying around.
This time Ondrej, Klara and me had the opportunity to sleep in our hammocks, which was not possible at the ruin the previous night due to a lack of tree’s. And soon the firewood was collected, and dinner prepared. A delicious piece of pork meat with salt and pepper. Next morning the view from my hammock. After we packed up it was time to head back to the cars. We followed this stream. Time for the last ‘gruppen foto’ before we would enter civilization again. And to celebrate the succesfull weekend, we had a soup and beer in the local pub.
On the wall on the left side was a painting hanging of how the ruin would have looked like back in the days. And here the video of this weekend hike:

I took the shrapnel knife plus billy can out for some testing. The knife, still shaving sharp and no damages to it, […] 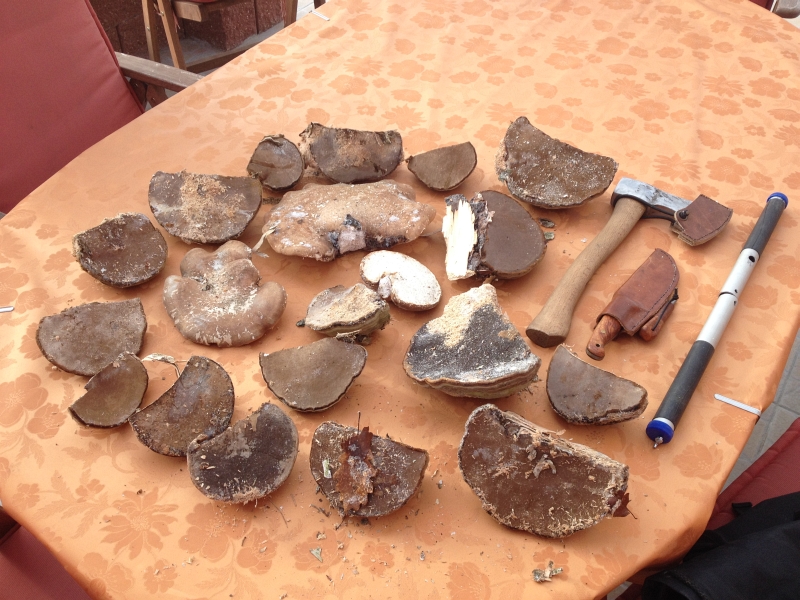 On first christmas day I received a new backpack that I asked for, it’s the “JÄGERRUCKSACK” with about 35 liter capacity. I […]

During this trip I made almost no pictures, but I managed to make some video: