In March 2014 I made the knife I still heavily use. The sheath was made from an old leather school bag, and did it’s job quite good, although I did not much work with leather before that.
In the design I made a mistake which caused it to fail over time slowly, and at the end of this picture report I will show you why.
So now I made a new sheath, and here are all the steps.

Drawing the shape on paper. Fitting in all the pieces on the piece of leather I have. Later I cut some additional pieces for “spacers”. Drawing it on the leather. Cutting it all out by knife. Firesteel wrapped in plastic, and the firesteel loop soaking in water to wetform it. Firesteel loop shaped and now drying. First part of the sheath being glued. All the glueing is done, and cutting small grooves, so the folding will go easier. Wetforming it with the firesteel. Burnished the edges, and made a stichgroove. Dyeing it with leather dye. Punching the holes, but since it is several layers, it did not go through all the way. So drilling it as well. Double stitching it with the same thread used for horse saddles. Adding a press button for the strap. Treating the sheath with brown shoe polish and cream, and this is the final look. The old sheath and why it is not usable anymore. Here is why the old sheath did not function anymore properly.
The part at the knife I point at, sticks quite a bit out compared to the handle.
With the old sheath, I wetformed it around the handle and closed it there as well, so it had a tight fit.
But every time I pulled out the knife or put it back, the edge was damaging the sheath.
And in the last few months it was so damaged that the knife fell out very easily. With the new sheath I kept the opening as wide as the blade, to prevent this from happening again. The part which is wetformed around the handle is not stitched or glued together, so it is moveable.
There comes the strap in place to lock the knife.
Lets see how long this sheath will last. 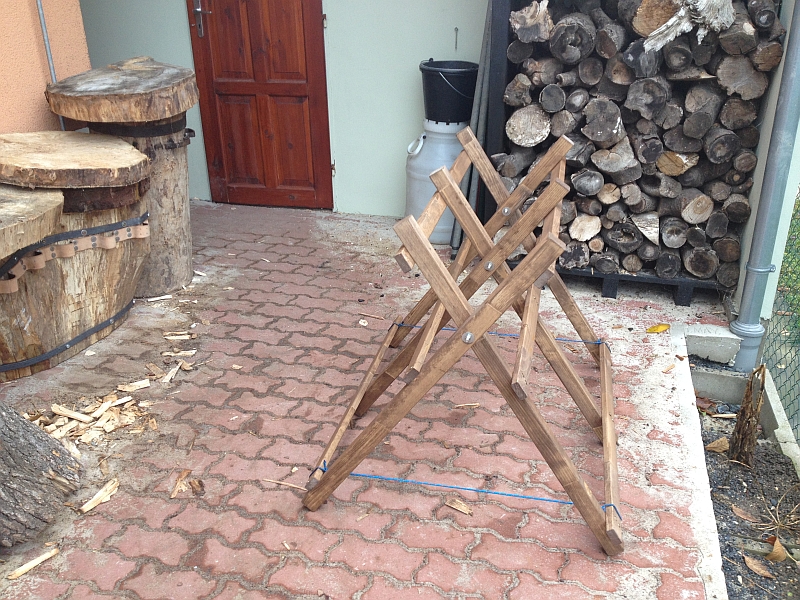 Winter is coming, and I have lots of wood to cut and chop again 🙂 Previously i always cut all the wood […]

For quite some time I wanted to make a birdhouse from a log, here’s the result.

My tool shed became a big mess after years of adding things. Nothing had it’s own place, and it became a problem […]